Introduction The advent of technology in media has been changing dramatically. Its pervasiveness and ubiquity made certain effects that are conspicuous nowadays. In this generation, the internet; one of the new forms of media offers services that cater not only dissemination of information. Moreover, the conventional use of media was incorporated with more complex use. The transition of technology abducts the user to a “cyberspace” or a simulated world created by the advent of internet. The mass audience seems to have a separating meter on real from virtual world. It is not surprising that even socialization was also an issue to the internet journey. Socialization as defined is a human activity accord to people’s freewill to manage them and to the other people without a need of control or governance. It is free, accord to human rationality; it is neither a right nor a privileges. This means that this activity is spontaneous and not insidious to a person. Youth’s, nowadays are enjoying the gift of sociological capability because they benefit from it. And it seems like media on its symbiotic relationship to the users seem to delegate and offer the new service which is now called “social networking”. A structure made by individuals or organizations to connect easily with another person. It is a way wherein people can socially interact through the help of internet services. It provides an online community. Users of such services can do different things as part of their prostheses and accord top their demographics. Enjoy it without any hindrances and likewise in just a click, from analog to digital signals, you can make a lot of friends on the empirical 4 sided CRT monitor. A wide variety of individuals are connected by one or more specific types of interdependency such as friendship, kinship, sexual relationship, knowledge and prestige. Getting along with them will make a person learn cultures, social standing, moral values, educational attainment and lifestyles. Here in the University of the East, social networking is not a taboo. Students conspicuously use this technology. Students do log in and check their respective account

checking up their friendster, myspace, facebook, and other networking sites that seem like serving them well. It serves as a bridge way for having friends, keeping in touch with them, expressing themselves through blogs, reviews and also learning cultures, ideologies from other people. Studies shown that the student’s frequent use of such service develops a phenomenon wherein users do create a social identity of themselves. They tend to manipulate the configuration of their traits. Looking at in different way, there is an existing relationship between social networking and the person who does it; internet and other interplaying factors were perplexing the idea of how media works and enshapes public opinion, interest and socio cultural aspects. It gives queries like how? Why? Students use this service and moreover engage themselves on it. It’s ambiguous since earlier, it has been stated that socialization is rationale activity and we could acquire the needs for belongingness even without the use of technology. Students might probably say that it gratifies them, and preserve them as a primary objective for the use of such technology. According to Marshall McLuhan, technology drives cultural change. It tends to create and cultivate new attitudes or triggers pre-existing attitudes that human’s had it. It is a socio-psychological phenomenon since student has their reason on using it and as they use it there is a noticeable effect that occurs from them. Moreover, the social learning theory of Albert Bandura that people learn through observing other’s behavior, attitudes, and outcomes of those behaviors. “Most human behavior is learned observationally through modeling: from observing others, one forms an idea of how new behaviors are performed, and on later occasions this coded information serves as a guide for action.” (Bandura). Social learning theory explains human behavior in terms of continuous reciprocal interaction between cognitive, behavioral, and environmental influences. Here the usage of social networking seems to be a bridge way for this theory. Therefore, what are the underlying answers from those ambiguities? In this research, it will carefully analyze the quantitative data to prevail the queries that emerged from the usage of social networking of the students. What are the attitudes of the students towards the use of social networking? How it gratifies the needs of the students, specifically the sociological needs? Does the social networking have

1. Students should utilize certain time for researching or advance study aside from social networking. 2. The campus organizations were some of the peer groups that students could join to mingle and enjoy interacting with different people. 3. Students would have certain restrictions on how will they use and view the usage of social networking. For example, if they have spare time or they are on the time of net researching they could visit their social networking sites. 4. Socializations are best to be done in person, a lot of things could be discovered, and it has no barrier. Students could show who really they are. They could join even an off campus activity and showcase their talent. In that way, they will not only enhance their self-esteem but they could also form new group of friends. 5. Students should evaluate themselves; assess their aspirations in looking for friends. They should not always seek attention, instead try to confide themselves with those people who appreciate them.

Results: The research has a potential to become a basis for everyone. The survey, interviews and questionnaires proved the researches that his study is reliable. The students had participated enthusiastically to the extent that they took this activity seriously. The practicality of the topic triggered the student’s alertness and likeness to participate. This helps the researchers to easily communicate and talk with them about the study. Consequently to the actions that the researchers have taken, the gathered data were analyzed to figure out the answers for the problem solved. 1. Students spend 2-5 hours on updating their profile, posting blogs and interviews and chatting. Social networking has been part of the routine of the students. Most of them were using the following social networking such as facebook, friendster, twitter, multiply and MySpace. The students of today are much socially inclined compare to the past generation of youth. 2. From the survey conducted, students of frequents

users do use the social

networking sites of the following reasons: •

Students use it as a past-time, just consume their free time.

Students use it to get in touch with their friends. They communicate and at the same preserve it for their own good.

Students use it to discover friends, ideas and at the same time share thoughts through blogging reviews and others.

Student’s use it establishes their prostheses and increases their confidence. To have self-esteem and to achieve social belongingness.

leisure activity. They spend allotted time using it after finishing all their responsibilities in school. 4. Students use social networking to suffice their social needs like friendship. They are motivated and goal oriented to preserve their self-confidence. They use is to get in touch with some of their friends, to discover and establish a new friendship at the same to achieve their social belongingness. As Abraham Maslow’s Hierarchy of needs, people need belongingness and acceptance from the society. That is the main reason why students are encouraged to use social networking. Most of them have enhanced their self-confidence and self-esteem by meeting and interacting people in online community. 5. Students were motivated and goal directed to use social networking sites to preserve their self-confidence and self esteem. As to social identity, the social belongingness is an achievement for those who use it.

Attention that sometimes they could not get from home. Remember that one of the youth’s priorities is the thing that makes them happy and relieved. They feel relieved when they open up their woes to their cyber friends that are apparently distance away from them. That’s why in a manner where in the self-preservation of youth are slowly changing in all means of social networking. Thus, it gains not only the self-confidence but also it teaches the youth to become more outgoing and allows speaking for them. Being hooked with social networking has nothing to do with becoming a bad person. Hence, it could be a contribution to become better. They paid attention to the fact that social networking now can still preserve the values of every student and other people too. This brings enlightenment to us if we would practice in a good way. They get to meet lot of people all kinds of them. And the main point to be noticed here is what we look out from the social network. If you are looking out for friends, learning new things, getting your doubts clarified and being more social, then this is a good opening for you. And so we conclude that there is an existing positive relationship between the social networking and the students who use it. The habits and attitudes formed accord to their aspirations were evidences that they have gratifications from using the social networking sites. It serves as their prostheses. It enhances their interpersonal skills through frequent communication and expression. They tend to interact with different people and show their character social belongingness was one of the motives and achievement of the students as they use those social networking sites.

ABSTRACT: Social networking and its advent of being popular to the students has been an issue in different studies. The habits and the attitudes towards the usage of such service disclose an evident and conspicuous effect to the students who’s using it. DIRECTIONS: possible.

Read the following questions carefully and answer it as honest as

3. How frequent you use the internet service? Per day: Per week:

5. Are you familiar with social networking? Yes_____

6. How did you become familiar of the social networking? TV: ____

8. How frequent do you use the service? Per day:

The social networking service gratifies the accord needs. It affects my personality in such way when it comes in interpersonal skills. It is an extension of me; I do render my skills by using it.

The social networking sites change my views on socialization. I am satisfied with the service. It enhances selfesteem. It makes me gain an extra mile for enhancing my interpersonal skill.

"The very essence of your words is truth; all your just regulations will stand forever." Psalm 119:160 (NLT) Thanks and God Bless you! 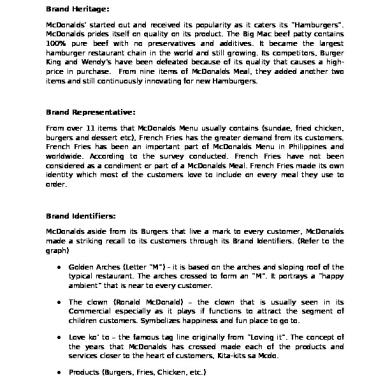