News investigative program such as Mission X and Imbestigador are nowadays a part of the long run of television programming. Here the program exposes the anomalies, abuses and other crimes by exposing to the public the entire series of actions done to solve the problem. It will be a series of actions to be exposed on the proposed airing until the case was solved and to be closed. The actions are like an excerpt from the famous novel of Scherlock Holmes. The only difference is that it is a captive audience wherein viewers are just swallowing the cliché ridden effects of media. It is said to be part of the responsible programming as it helps and promotes the general welfare of the people especially the victim. As our country’s constitutional provision under Art II sections 20 and 23 which states that any non-government sector are encouraged and has the commitment to help promoting the welfare of the countrymen. It seems like the media are said to be the accountable sector for securing the nation’s welfare. It even triggers the people to cooperate to different ways to solve such problems. In other words, help is a step away.

However, let us not cast these things out in a political parlance. Here we are not recognizing or we do fail to see the things on its most important surmise. We do look at the ethics on a myopic point of view. Try to look at the program it first violates that rights of the person to privacy, aside from the fact that it is again a part of constitution still on the moral parlance it is not correct. Covering a news in a private manner wherein there are hidden cameras are perhaps on the views of the people as a wise strategy but it is a form of decline one’s chance of enjoying his business and privacy. Moreover the suspect’s right to a fair trial is clearly jeopardized. Here, the concept of a right is not recognized since the only views to it was the “crime and anomalies as presented by the media” and not the “manner how the media were able to solve it in either a sophisticated and humane way or detrimental to the part of accused. See? In addition, the so called character of the program tend to be a licensed deception-“ist” as they deceived other people just to got the fastest result to their investigations. Are they an advocate of truth? Moreover, they are just framing those things to render what the viewers would like to see according to the script. Responsibility and accountability is an issue here aside from the ethical point of view. Let us skim through the code under the KBP;

Programs that underscore any form of injustice or wrong-doing shall show that such acts are punished just as meritorious deeds are rewarded. The portrayal of criminal activities shall always convey its negative social and human effects. It simply portrays on how it will be portrayed but not on how to look on the other side of the fence. Moreover, at the end of the series of action conducted by the program the suspect are being exposed as if they are the most sinful life forms existing in this world. Like the GRO’s, not looking at their side; the criminals as if they have that huge offense that will have to be recognized. Perhaps it is a pinch of humor since the program was only catering to the audience that seems to have that sufficient knowledge on how things are going. According to the constitution, as well as the BMC; the media must help develop the nation through its services. It is overly hammered on the point that it generally concerns on the aspects of having an affluent living on a just and fair setting. Let us not ground on to look at things if the shows are worthy enough to be recognized as part of the members of the game that continues to help and elevate our status to a point of progress by also considering the side which most of us did forget. 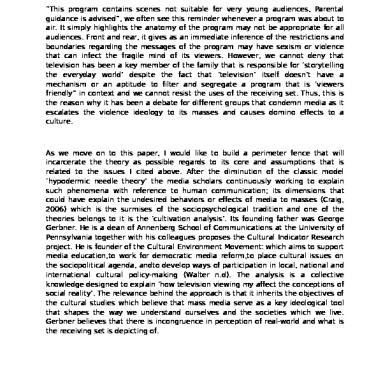 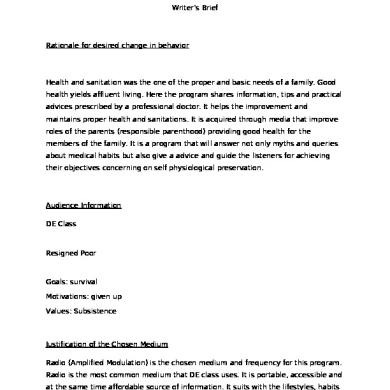