Cultivation Analysis : A term paper “This program contains scenes not suitable for very young audiences, Parental guidance is advised”, we often see this reminder whenever a program was about to air. It simply highlights the anatomy of the program may not be appropriate for all audiences. Front and rear, it gives as an immediate inference of the restrictions and boundaries regarding the messages of the program may have sexism or violence that can infect the fragile mind of its viewers. However, we cannot deny that television has been a key member of the family that is responsible for ‘storytelling the everyday world’ despite the fact that ‘television’ itself doesn’t have a mechanism or an aptitude to filter and segregate a program that is ‘viewers friendly” in context and we cannot resist the uses of the receiving set. Thus, this is the reason why it has been a debate for different groups that condemn media as it escalates the violence ideology to its masses and causes domino effects to a culture.

As we move on to this paper, I would like to build a perimeter fence that will incarcerate the theory as possible regards to its core and assumptions that is related to the issues I cited above. After the diminution of the classic model ‘hypodermic needle theory’ the media scholars continuously working to explain such phenomena with reference to human communication; its dimensions that could have explain the undesired behaviors or effects of media to masses (Craig, 2006) which is the surmises of the sociopsychological tradition and one of the theories belongs to it is the ‘cultivation analysis’. Its founding father was George Gerbner. He is a dean of Annenberg School of Communications at the University of Pennsylvania together with his colleagues proposes the Cultural Indicator Research project. He is founder of the Cultural Environment Movement: which aims to support media education,to work for democratic media reform,to place cultural issues on the sociopolitical agenda, andto develop ways of participation in local, national and international cultural policy-making (Walter n.d). The analysis is a collective knowledge designed to explain ‘how television viewing my affect the conceptions of social reality’. The relevance behind the approach is that it inherits the objectives of the cultural studies which believe that mass media serve as a key ideological tool that shapes the way we understand ourselves and the societies which we live. Gerbner believes that there is incongruence in perception of real-world and what is the receiving set is depicting of.

In order to make the understanding of the facets of the theory, let me define the words violence and effects that we will b encountering through-out this paper. Violence is the ‘overt expression of physical force with or without a weapon against self or other compelling action against ones will on pain or hurting’ (Gerbner et al., 1978:179). Effects ‘is a the output of stimulus-response model’. During the development of the theory, Gerbner found out that the violence was besieged at specific groups of people he uses the quantitative method and observation on viewing, he distinguished that children, women, the old, the blue-collar and nonwhites rather than white, middle-age and middle class men (Gerbner et al., 1977). That’s why he believed that it was the beginning rather than the end of the puzzle. The questions were: why was television so violent? What its impact is?. Thus, he continues the study that compose of three parts; institutional research, examining the broadcast structures, the message analysis and the cultivation analysis (Ruddock, 2001; 100). The patterns he had found out brought the significance that is not the presence of violence among the audiences but rather ‘a sense of fear and the need for protection’ (Gerbner et al., 1978:184). Moreover, the Cultivation analysis stated the posits which said:

“human beings learn how to be members of our culture and are socialized through our stories. They used to be told orally. Stories stay with us for a long time and teach us how think of the world; Tell us how things work; Tell us how things are/came to be;Tell us what our choices are and what we ought to do about them” (Gerbner 1978).

The attention seeks out the differences in knowledge and beliefs and attitudes of the viewers on television rather than behaviors which is usually the approach of other theories that may abstract the concept. As a carte blanch, the premise of the theory said that “television is responsible for measurable and identifiable effects in formulating concepts of social reality (Gerbner et al., 1978:196). Using his message system analysis the quantity made a hypothesis that classified the viewers into two; the heavy viewers (those who watch 4 or more hours a day) and the light viewers (those who watch 2 or less hours a day). Heavy viewers do not to choose shows, and thinks that what they see in the television is the reality while light viewers don’t. The light viewers uses other media to gather information. The experiment he used was done to determine the contributions of raptness of watching television shapes the reality in the eyes of its viewers. The focus is on the heavy viewers since they are likely to be affected to the frames presented by television. Basically the distinction between the two groups is the ‘ideologies regarding on empirical issue’ that is later on will be justified on this paper. His findings made the critics include it to the effects tradition since it betrayed the positivist and administrative roots during its development. Furthermore his paradigm made a classification of effects

which is the ‘first order effects’ (general beliefs about everyday world e. g, overestimation likelihood of being a victim of a crime) and the ‘second order effects’ (specific attitudes e. g, view the world as a mean and scary place).

The cultural indicator research project also found out a phenomenon called the ‘resonance’ or the ‘double dose effect’. This occurs when what is seen in television is similar to one’s life experience and creates a ‘double dose’ of the message which triggers cultivation (Gerbner et al., 1980; p 15). For example, a widow who has only son and her son failed to raise his son well, thus the son on hi teenage years become a member of a gang. When she watched a show like “Pieta” (ABS-CBN program) that also depicts a similar situation of her, she tends to believe that having a gangster son is more common than it really is. The resonance effect amplifies the evidence of cultivation analysis.

Gerbner and his colleagues also found out a conceptual expression called the “mean world syndrome” (Gerbner et al.,1988)that television depict an overrepresentation of violence immersing is viewers to the ideas of violence making them to be frightened and overly cautious. For example, here in the Philippines , cases of rape and sexual abuse are often depict by some current affairs program, the effect would be, most of the women are having a fear of what they watched are possible to happen and the community they are living is not safe.

The attitudes that viewers exhibit is due to the vices and act on their TV set. Gerbner sees the television “as where the action is” (Lent, 1992). “It is neither a window nor a reflection of the world but a world itself” (Chandler, 1995). It is a “modern day religion that presents coherent vision of the world” (Stossel 1997). And to us viewers, we are “isolated and atomized thus highly inalienably” (Greek, 1996). Those metaphors are used to describe how we see television. However, we must list the idea that spoon feeding by television must be eschewed and use our taste buds to not only what tickles our palate but moreover interpreting the decoded messages and justify it. Having in mind that out receiving set is a convenient way to get the amount of facts we must still be aware that it has a ‘long term effects, small, gradual but cumulative and significant’.

Since the theory is said to be the “resurrected hypodermic needle theory” it receives criticisms but I will only mention those are easily understood by as neophytes on this field. According to McQuail, ‘television is not only the source of effects but also other media like experience, by other people or by opinion leaders (Boyd-Barett Burnham 1987, pp 99-100). The correlation between television exposures of beliefs of viewers does not establish causation. Doob and McDonald said that the approach is a crude yardstick to measure the effects of media and its contribution. Hisrch also said that the demographic factors must be considered on taking the approach. Moreover, Condry (1989 p 134) pointed out that it is not the exposure but the way how people interpret what is shown to them like interplaying factors such as socio economic background. The study is focused on quantitative thus rejecting the quality of the theory which is primarily the consideration of a context.

For the purpose of these paper, I try to recall movies of violence like Frank Miller’s “Sin City”, Michael Tarantino’s “Texas Chainsaw Massacre which depict violence; TV series like “Greys anatomy and ER which exposes the other side of a the hospital; the games like “Grand theft auto” which we can deviate and delved that it can possibly ensconce our beliefs but absolutely not evident that it will predict our behaviors. The message interplay with our past or present experiences that will make us decide for ourselves. It is somehow a good theory to ponder on, since it opens our eyes how the drastic changes of “high touch’ dynamically changes our symbolic environment. The messages we can’t resist, the representation can warn us and provides an idea of ‘control’ and manipulations of our identity being intensively altered by our TV set. The theory’s sense is on its pragmatics and not for a theory to believe. Epistemologically speaking, we must know the truth value behind what is being presented and sort out the fallacies. The theory is evident in such a way that’s why is was been a debate for different groups in the industry since the widespread of media (Mcquail) and they see them as an investigator of reality and exposing it whether they will be believed or not. We must set our agenda, frame it or gate keep it so as to make the crude message a useful one.

Gerbner accomplished his attempts to explain the phenomenon that television has been a part of our conventional lives and bring us to different dimensions whether it was perceived as a negated or beneficiary to our lives. I wanted to pint out as to end this paper that let us take television as an empirical concept, a receiving set of transmitting images by radio waves and electrical impulses, a product of technology for dissemination of information. Period. It has limitations, no matter how we use and interpret its messages and look at it in different way, television is television, it will not always, and it cannot accurately depict the real-world we are living in.

Cultivation Theory and Media Effects. From the 0911 Encyclopedia Online. Retrieved December 1, 2008 from: 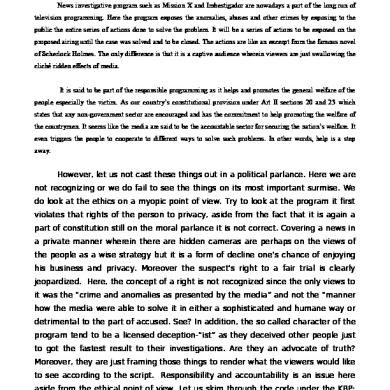